Middle Tennessee has seen its population surge over the past decade. Rutherford and surrounding counties are experiencing some of the highest growth rates in the country.  Although many of the affected counties have long-range strategies for school expansion, several of these plans were recently updated to match the surging population. The increase has resulted in the region constructing at least one and as many as three schools every year for the past 10 years.

The city of Nolensville has been dealing with this influx of families, and many of their classrooms are facing overcrowding. The community had been planning to build a new high school and elementary facility since 2013. The new Nolensville High School will allow the school district to reduce class size and address the district’s concerns regarding overcrowding when it is completed in 2016. 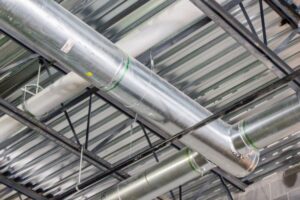 The sheet metal works subcontractor for the Nolensville high school was Roscoe Brown, Inc. The 75-year-old company services the middle Tennessee market through a network of facilities located in Nashville, Murfreesboro and Tullahoma. The HVAC market company serves the commercial and residential markets, and has a full sheet metal shop along with its other service offerings.  Mike Meacham heads their sheet metal works department, and has over 30 years of experience working in the industry. He said central Tennessee is among the fastest growing areas in the country.  “By all accounts and reports in newspapers like the Wall Street Journal, this area is playing catchup with infrastructures like schools,” Meacham said. “For the last 10 years we have been building new schools at a rate of one to three per year.”

During this rush to get the new schools on line, Roscoe Brown investigated ways to speed production and installation while keeping HVAC construction costs under control. They were introduced to new self-sealing snap-lock pipe and were impressed by its simplicity. GreenSeam Plus factory-sealed ductwork is manufactured by GreenSeam Industries, a sister company of Pennsylvania-based Ductmate Industries, a producer of duct and HVAC sales-related products. GreenSeam Industries engineered a completely factory-sealed pipe and fittings duct system for the HVAC system’s low-pressure airside.

“Before we committed to the product we had representatives from GreenSeam Industries demonstrate that the pipe would perform as promised,” Meacham said. “After the testing we were convinced this product was for us.” 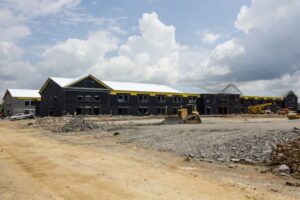 The school is 260,000 square feet spread over two levels. Sheet metal works contractor Roscoe Brown fabricated all of the trunk duct for the project and used GreenSeam Plus for the run-outs to diffusers. Proper sealing of the duct system is a critical step in almost every HVAC construction installation. Insufficient or faulty sealant application will lead to leakage problems, which can place additional strain on the HVAC system, while increasing fuel use. GreenSeam Plus eliminates both material and labor costs associated with external sealing and taping of the ducting, the manufacturer says.

Conklin Metal Industries has served the Southeast U.S. since it was founded in 1874 with sheet metal works and HVAC construction products, and is a local distributor of GreenSeam Industries products. Ryan Wigginton is the territory manager, working with Roscoe Brown and other sheet metal contractors.  Wigginton said GreenSeam Industries engineered the GreenSeam Plus low-pressure duct system to perform to the highest standards. “A button lock is used verses a ‘Reeves lock’ because it is less likely to separate over time or through rough handling,” Wigginton said. “The snap-lock pipe is supplied with a pre-installed EPDM (ethylene propylene diene monomer) gasket in the longitudinal seam and transverse joint, requiring no additional sealing once snapped together.” 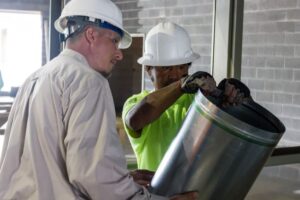 Wigginton said all factory joints have the exact amount of sealant necessary to provide the system with a positive seal, preventing wasteful oversealing or undersealing that can lead to leakage.  GreenSeam officials say the volatile organic compound-free gasket has a shelf life of over 20 years, a melt point of 300°F and meets the requirements of ASTM International standard E84-05. GreenSeam Plus is available in diameters 4 to 14 inches and in lengths from 24 to 60 inches. GreenSeam Industries also provides factory-sealed conicals, high-efficiency takeoffs, reducers, collars and fittings.

To date, Meacham said they installed over 2,000 feet each of 8- and 10-inch GreenSeam Plus pipe and plan to stay with it. Besides installing fast and saving time, they have had no rework due to product failure. Meacham said the faster installation times are beneficial in keeping up with tight schedules. “Jobs like the Nolensville school had been delayed by poor winter weather and the faster installation helps us make up for lost time,” he added.